Rabat, February 11, 2005. Fifth day of a “conference” proposed by Jean-Paul Thibeau and Abdellah Karroum, co-organized by the Institut Français and L’appartement 22. It’s searching for itself, still. Around a table and in the city. A small group of Moroccan artists, or artists living here, having this experience of searching together, beyond every man for himself, a form of…

The letters of the word ART are contained in the name RABAT, but in disorder and in reverse. Coming from outside, and for the first time, the traveler tries to take several snippets of it. Hardly looking at the monuments, trying to observe the people, to search the faces, to let himself be controlled by his body’s narrative. And at first he is impressed by the police presence, a dissuasive sign of a controlled society. Encounter a group of the blind. Witness every day the reunion of the “educated and unemployed,” so that the keepers of order disperse without the attention of the surrounding Parliament. A choreography that doe not stop, begun again out of discontent that risks encroaching on the proper and straight organization of the avenue Mohamed V.

Past the medina, by its multi-colored stalls where the handicrafts (fabrics, rugs, slippers, furniture…) rub elbows with useless trinkets and pirated technology. Misery and commerce. Between the museum and the contemporary art installation.

Quatier des Oudayas. Small streets surrounded by white and blue façades, architecture and landscape, where the wind swallows more certainly than modernism. Without a doubt. The tourist could say to himself, having come here in search of disorientation, the confirmation of an immutable world, where north is north and south is south, riches lie with the rich and misery with the miserable. And every man for himself.

So, this conference of “artists” is off to the side. For nothing. Gazes, speeches, gestures: three times nothing. Make something from the meeting. “See yourself in the other,” says Batoul S’himi, woman and artist, whose last exhibition, “Absence,” never took place. Images are there, floating. “The territory outside of yourself is never empty,” offers Jean-Paul Thibeau. Blindly, but without blinding oneself, to write in all kinds of ways, to fumble with the art of assemblage, of adhesion, suggests Youssef Amine Elalamy, a writer who amuses himself today with what you could say about his first book, that it was “not literature.” Learning how to do with often means doing without. The conference in Rabat transports itself into the medina. It was planned that at the end of the week, the “public” would be invited to the M’rini house, a superb construction from another time, an entirely empty setting covered with tiles and mosaics, flanked by salon-like alcoves that looked out onto an open patio.

Some objects found along the way, a little Moroccan pennant, a woman’s head scarf with a colorful design, a worn red carpet full of holes, already offering hints of possible compositions. We improvise portraits, we look to tame the space. We must come back the next day to continue the exploration. But tomorrow is a holiday and the official authorization to use the space and to welcome the public there was not given. The path continues. Entering that which could be forbidden and that which is not authorized is to look for the fracture. And to rightly authorize this game for ourselves.

A paper chase. Build and destroy. Do nothing and rebuild. Take off, remove, exchange, go on chance. How do you make visible that which is already there and yet quasi invisible? At the entrance to the medina, waiting near the public writers who seem to kill time in front of their timeless typewriters. Entering the movie theater’s belly (Le Mauritania) where the unclean images of an Indian film do not chase the roaming cats and the stench of urine that follows. In Casablanca, Maria Karim made a documentary about a popular movie theater that was dismantled and whose land has become a public wasteland. Projecting these images of a movie theater that was (and that we can no longer see) in a movie theater which is still, surviving for better or worse what must have been an “hour of glory,” is to displace the time of history, to shift back the gaze’s place, to intrude in a space where “art” was not predicted and that “art” could have not foreseen.

That is what is happening here, in Rabat, in the unexpectedness of a conference which goes from the meeting to… Today, February 11, an invitation is addressed (by SMS, word of mouth, and chance encounters) to those that would like to be a part of this journey, eyes closed, that’s to say, without presumptions. From L’appartement 22, a studio in downtown Rabat used by Abdellah Karroum for artistic encounters, to the studio of Imad Mansour, an Iraqi artist who put down his eager laugh in Rabat, a meeting has begun. What will happen? We don’t know.

In fact, Rabat was a city of pirates, we say with a certain pride.

Translation from the French by Emma Chubb

Born in 1958, Jean-Marc Adolphe was a journalist before specializing in dance and theater criticism and the analysis of cultural politics… In 1995 he founded Les Editions du Mouvement, and today is the director of “Mouvement,” an interdisciplinary academic journal. At the same time, he was responsible for the advising and artistic direction of festivals and theaters (including the Théâtre de la Bastille, in Paris, from 1994 to 2001.) A sharp observer of the aesthetics of contemporary artistic creation, he strives to advance the relationship between art and politics. He is the author of “Crise de la representation” (Editions de l’Entretemps, 2003), and numerous texts and articles in academic journals, many of which can be accessed at www.mouvement.net. 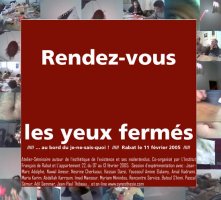