The exhibition of the “World’s Pressure” (Monde sous pression) brings Batoul S’Himi’s most recent work into view. All of the works in the exhibition were made in 2008. The artist recycles or transforms objects from daily life into tools of resistance and ethical engagement, as the series using perforated pressure cookers started during the workshop "3 Rs Maroc" lead by Seamus Farrell and in which Batoul was participating. The pressure cooker, such a familiar object to women in Morocco, is transformed into a strangely open form. The convivial object comes to question social conventions, notably the relationship of women to these symbols of “interior life.” Batoul S’Himi activates the machine of protest and responds to aesthetic rules with this portrait of Brancusi made by recycling objects from the Moroccan kitchen. Batout’s act can be seen as wild as subversive her art is in a conservative society. Did not Brancusi become a sure value of Western art after he provoked one of the most important processes about the definition of art? This exhibition also speaks to the ethics of an artist living in a society of continual mutations. The art object is defined by its ability to speak to the world, absolutely. The language of art expresses the reflexive effect of the artist’s gesture. If the production of a work is a manifestation of resistance, its exhibition is an offensive in order to act in the world!

*2 Batoul S’Himi, born in Asilah in 1974, lives and works in Martil (Morocco). Participated in the historic exhibition "L’objet désorienté," organized by Jean-Louis Froment at the Musée des Arts Décoratif in Paris and the Villa des Arts in Rabat in 1999. 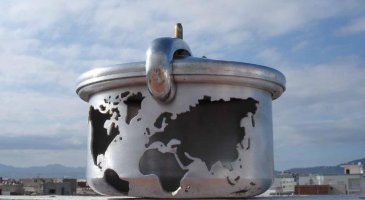 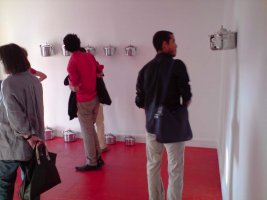